I think David Lowenthal was creeping around my brain for a while.  He says, “Nostalgia transcends yearning for lost childhoods and scenes of early life, embracing imagined pasts never experienced by their devotees or perhaps by anyone” (xix).  I do this all the time! I even indicated I have this habit in the discussion about Lucy. Because humans have nostalgia and imagination, remembering becomes recreating.  No evidence can tell us about the past with complete certainty.  That’s true of all memory; that’s how the mind works.  We take in information and automatically our brains process it by what we already know.  This idea is the same that comes up in Atlas’s “Stranger Than Fiction;” the fidelity of retelling an experience cannot reach 100% because of time and circumstance. Again, Platonic Realism and Bacon’s Idols play a role here, Bacon even moreso.

Bacon’s Idols of the Tribe discusses how human senses corrupt the truth.  The same applies to memory.  Sentimentality causes a glorification for the past how it happened and how it may have happened and how it didn’t happen at all but how it perhaps could have or should have.  Lowenthal says that the past is an “artifact of the present” (xvi) and “the pasts we alter or invent are just as prevalent and consequential as those we preserve” (xviii).  So how we feel about the past helps us understand it better.  It also motivates us to preserve it. 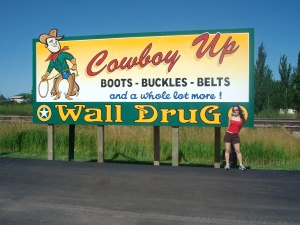 During August 2009, I traveled to South Dakota.  One of my excursions included a drive through Wall to see Wall Drugs.  Why did I want to see Wall Drugs?  Because it’s a piece of small town life from years ago.  Sure, now it’s commercialized for the tourist industry, but the signs advertising fresh water still dot the roadways, offering entrance into the past, into a realm impossible to truly enter.  For a moment, however, I was there and became a part of history. In a sense, then, in preserving history, we preserve ourselves.

Lowenthal, David. The Past Is A Foreign Country. Cambridge: Cambridge University Press, 1985.